That cold evening the sky was as bright, crisp and pure as a topical bay, devoid of even the most delicate cirrus clouds, announcing a welcomed overnight drop in temperature. Lovely. Perfect. At least until Doc noted, above the treetops, rose a small cloud. A singular fluffy cloud, low hanging and plump which, according to his knowledge of meteorology and from general experience, was extremely improbable under present conditions.

Doc pointed it out to the only other passenger in his rust fringed 15-passenger van. “That cloud is strange,” he said.

The passenger, who was both his daughter and his office’s receptionist, looked. She joked, “It’s aliens.”

He agreed. “They’re sitting up in there, hiding and watching us, taking notes, laughing to each other thinking they’re invisible like ‘look at those humans, they have no clue. So stupid’.” He preferred science fiction movies over books. He didn’t have time for reading anything other than medical journals. Although, personally, his favorite form of speculative fiction was oral storytelling, plots of which he could invent and use spontaneously. He was always spinning yarns, about anything, real and make-believe, and was darn good at it. Even his grown children, who knew his tricks well, could still be surprised and entertained.

“When I was young,” he said with nostalgia, “I used to think clouds were solid so I thought if you jumped out of a plane…”

“You’d go ‘yaaaaaaaaaaaahhhh‘!” She finished his sentence, knowing full well how he had intended conclude it and taking it one step further, making him smile.

The van lumbered down the narrow two-lane road among the occasional family car and a slew of roaring big rigs, there to ditch city traffic; the van bounced, with creaking joints, over small bridges and shrieked when asked to reduce speed, complements of brakes that longed to be worn by a school bus.

The weird cloud bothered Doc. “You can imagine a small plane or bird trying to fly through it and hitting something solid.”

“You know,” he said, distracted again by the past, “back in Panama a doctor friend of mine one day had to go to the interior and, to get there, you had to take a plane or helicopter. There wasn’t a plane that day so he took a helicopter instead. There were a lot of clouds, always a lot of clouds around the mountains, hiding the mountains. The helicopter. It smacked into a cliff hidden by clouds. Everybody died.”

Silence settled over them. Hushed jazz music trickled from the speakers, the only part of the van that functioned correctly 100% of the time.

“I remember also one time…” Doc went on with no sign of depression from the previous recollection, possibly since it had occurred more than four decades ago and also, perhaps, he’d come to terms with it. “One time when I went to the interior, I rode a little bus away from the city, far out there, and when the bus stopped I asked ‘okay where’s the plane?’ The driver said, ‘No, doctor, there’s no plane.’ I got out and there were horses. I went ‘What?!’”

During one of the Carbonero family visits to Panama, they had gone horseback riding in the rainforest clothed mountains amidst sleepy clouds, cool streams and waterfalls, and lively macaws. The horses had been rather short, and lean. Mari said, “Small horses like ponies?”

“No, they were police horses, taaaaaall. They walked on very thin ledges, one foot in front of the other. I remember looking down… like WHOA.”

Doc kept one eye on that weird cloud. It didn’t belong there.

A few crows flapped slowly past the cloud when something shot out from it—an ebony, skeletal appendage like the charred branch-arm of a snowman with several elbows and long knobby finger-like projections—and grabbed one on the birds, sending the others flailing and scrambling in alarm. The appendage snapped back inside the cloud with its prize, leaving no trace it had ever existed.

Leaning eagerly to the steering wheel, Doc cried, “Ah! A bird flew by, and a hand reached out and snatched it!”

Watching a soothingly endless blur of autumn colors flash by her window, his daughter laughed. 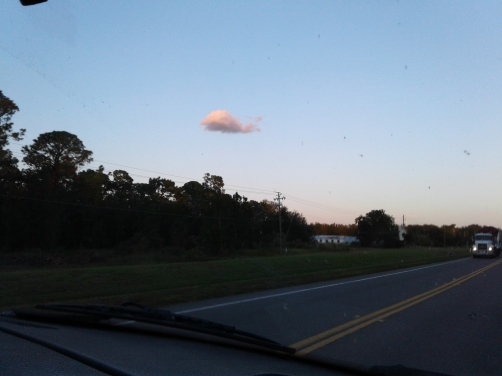 3 thoughts on “The Cloud”

Leave a Reply to K. A. Botello Cancel reply