When I was earning my AA, I had a history professor (PhD) who was also a fabulous storyteller (going to class felt like episodes and I had to come back next week to find out what REALLY happened; AH! She was so good!). I would absolutely take her class again, just for her.

The Nazi’s were marching toward Caucasus but Hitler spotted Stalingrad (it was out of the way but the city literally had his enemy’s name on it and that made him reeeeally want to crush it). So he divided his forces to cover both Caucasus and Stalingrad.

Stalin (paranoid like it’s nobody’s business) probably saw it coming because he responded at warp speed.

The fighting became insane but both leaders refused to lose. Eventually both armies received orders from their highest commanders that could’ve been translated to mean something like this:

My Prof: (Slyly and having way too much fun) “Under those conditions, who do you think would win?”

She explained that it all came down to which side feared their leader more. Answer? The Russians.

In all-out no-rules urban warfare, the Russians jumped in with both feet. They took to the sewers and launched surprise attacks on tank convoys from below, planted snipers in buildings already hollowed out by shells, and booby trapped everything.

by Georgi Zelma, Stalingrad, c. 1942 Soviets soldiers taking cover in the ruins near a Factory 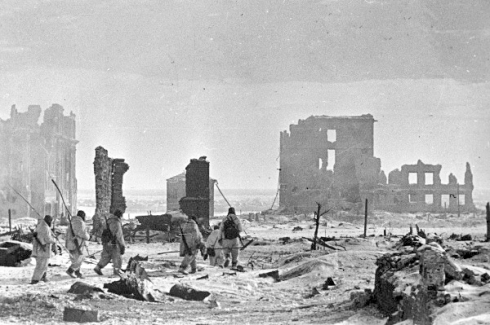 (What about you? What historical events/people/discoveries/expeditions/issues have contributed to your tales?)